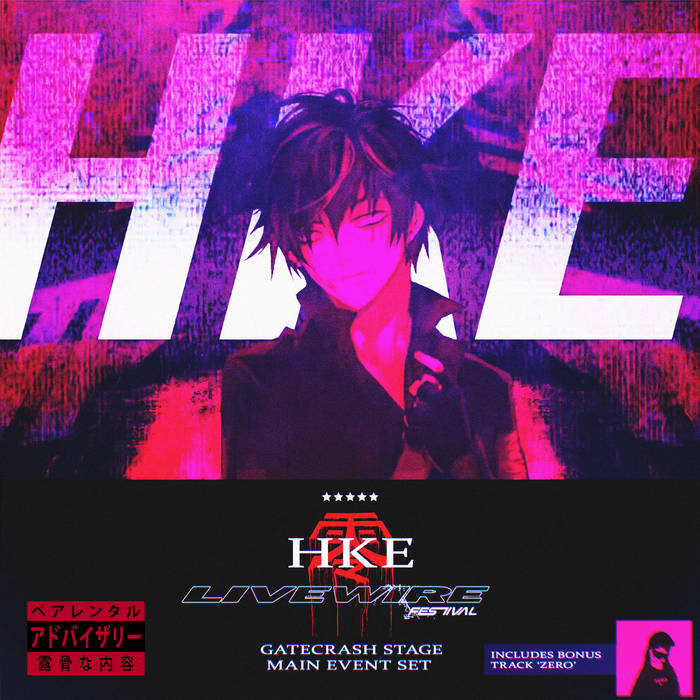 During the midst of a psychotic breakdown in the early weeks of 2018, HKE tapped into a zen energy that manifested itself as 'FLAP' via the unorthodox method of tweeting the phrase 'flappy bird' over and over, mutating the phrase into subtle variations until it began to take on a life of its own, possessing the artist. Tormented by a relentless hatred and anger after years of prolonged mental disarray, the transcendental mantra 'FLAP' became a joyful reprieve, a detoxification process. With the now-deleted phone game 'Flappy Bird' providing a signifying catalyst for such meditative understanding, a new philosophy of life and music was born: 'FLAP'.

As the following years came, what was once a simple mantra became a rallying call and a cultural nexus, as soon enough an entire scene of 'FLAP' grew out of its initial bang, encapsulated by the 'Flap Megamix 2019' mix/manifesto on Soundcloud, which saw the most elite flappers in the world come together in one 30 minute burst of oversaturated, overblown raw musical expression.  Following this, HKE would go on to perform a live 'FLAP' set at the Dream Catalogue showcase event in the autumn of 2019, London - simply playing the 'Flap Megamix 2019' in its entirety while flapping alongside fellow flappers Hard Kano and Flapzilla under an ocean of unbearable mic feedback that saw its original anticipating audience of 100+ dwindle to a small fraction. Symbolic of the public reception of HKE's deviation into 'FLAP' to date, perhaps. Though receiving such criticism for being ahead of his time isn't new to him.

If Hong Kong Express' dreampunk is the sound of the city of dreams, yearned for in its neon sprawl from the top of a megatower, a distant melancholy and romance beneath a lush blue or purple filter, then HKE's 'FLAP' is the blood-red filtered sound of the cyberpunk pharaoh on the ground, alive in the cloud, lucid to the beauty of the horrowshow, Y-3's on petrichor concrete, 'I'M SO COOL' in RAY-BANS, ripped black jeans, leather jacket, schizofeed flowing through fingers as water, digitally blown out speakers by 5G data overload, the train screeching along its tracks pumping wifi radiation into the aether, the oversaturated internet of value escalating into infinity. Desire, lust, the post-human condition, no borders, no bedrock, no end, no point. The machine itself becometh 'FLAP'.

One of the most seminal artists of the past decade, HKE's influence can be seen across the musical map today, having helped cultivate a godly range of styles and ideas that have infected the minds of artists around the world. This album, 'MAIN EVENT SET' is an undulating yet coherent mess of tracks, most of which were penned over the past two years under his various flappy incarnations and styles, that show HKE's 'FLAP' at its most organic and natural to him, merging trap, metal, electronic, dubstep, pop, soundcloud beats and his own unique style of saturated-autotuned vocal delivery and overamplified production he has manufactured. Here is his own variation of the genre he broke ground with. This is the #REDFILTER #HYPERCHILL vibe perfected, cultivated for the recent LIVEWIRE FESTIVAL organised by Nicol for Vapor Memory and Dream Catalogue. HKE's performance provided one of the main event sets for the show, defying all expectation, recorded here for posterity and with two additional bonus tracks: 'Zero', a cover of The Smashing Pumpkins song, and an acoustic rendition of 'Blood On Da Floor'. The album closes with the third bonus, 'Nu Era', which hints at the next evolution of HKE's sound - moving 'FLAP' into a more grandiose vision.

Whether you love it or hate it, 'MAIN EVENT SET' is HKE's statement of intent... as the saying goes, "To flap is to be".